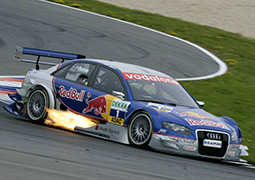 The Deutsche Tourenwagen Masters (DTM, German Touring Car Masters) is a touring car series sanctioned by DMSB and ITR who has been an affiliation of FIA since 1976 and 2003 respectively. Deutsche Tourenwagen Masters cars use a silhouette racing car based on a mass-produced road car, and is based in Germany, but also with rounds elsewhere in Europe.