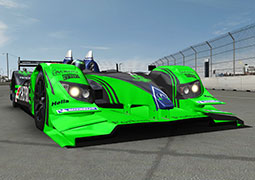 The Acura ARX-02a was a Le Mans Prototype constructed by Acura for competition in the LMP1 category of the American Le Mans Series. It was Acura’s second Le Mans Prototype, following their ARX-01 which competed in the LMP2 category. Unlike the ARX-01, the ARX-02 is a bespoke LMP designed entirely for Acura by Wirth Research.