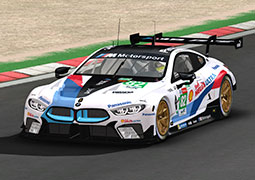 The BMW M8 GTE is an endurance grand tourer (GT) car constructed by the German automobile manufacturer BMW. It was developed in late 2016 and made its competitive début in IMSA WeatherTech SportsCar Championship and FIA WEC for the 2018 season, and thus marking BMW Motorsport’s return to 24 Hours of Le Mans after a six-year hiatus.