Skip to content
You are here
Silverstone 1975 for GTR2 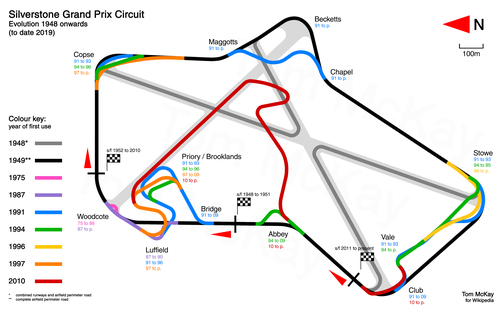 The 1975 British Grand Prix (formally the John Player Grand Prix) was a Formula One motor race held at Silverstone on 19 July 1975. It was race 10 of 14 in both the 1975 World Championship of Drivers and the 1975 International Cup for Formula One Manufacturers. It was the 30th British Grand Prix to be held since the race was first held in 1926 and the 17th time the race had been held at Silverstone. The race was held over 56 of the scheduled 67 laps of the four kilometre venue for a race distance of 264 kilometres.

The results were overshadowed by a heavy hail storm from Lap 53, which caused three out of the top four cars (Jody Scheckter, James Hunt, and Mark Donohue), to aquaplane and crash in the same corner, bringing an early finish to the race, and a significant absence on the podium. A number of other cars crashed at the same corner as well, including Wilson Fittipaldi, Jochen Mass, and John Watson. The race results were finalised the lap after the lap most cars crashed, giving Brazilian Emerson Fittipaldi, who had been the race leader prior to the storm, a one lap win in his McLaren M23. Carlos Pace, who was one of the crashers in his Brabham BT44B was classified in second position with another of the crashers, Tyrrell 007 driver Jody Scheckter classified third.

The win was the 14th and final win of Fittipaldi’s career which had included two world championships. He would continue racing in Formula One until 1980. The win also vaulted Fittipaldi past Carlos Reutemann into second place in the championship, 14 points behind Lauda.

This is 75Silverstone around the time of the Grand Prix, i used the 79 track as the base, but to turn the clock back a little, I made some changes, there are no whitelines at track edge, again no bridge on hanger but remodelled the section to something like it would have looked…and redone the chicane so it may be easy to take !

To enhance the look, i have changed a few buildings, stands, and especially the main garages in the the pits, (these probably should be in 79 version aswell). At present only made room for 30 cars, made the garages individual. so doors only open for each seperate car used. Plus added some of my little pit extras and quite few other things. Some banners are from the time, GTR2 style start/pit lights, rain reflections and animated marshals included.

Ideally would like more photos from the event to work from. I had a few rare pics and video capture. The catch fencing is provided for show only except for and because the use of the chicane is the only path, again i have included the fencing with directional marks on them, but staggered them so there is a slow path through, and they have the collison set to true, so you will wreck you car hitting them. Probably only applies for those that like to race online.

During practice there is hardly any crowds, but come the race sessions a lot more spectators will turn up. There are front and back doors to the garages, and both will open when a car occupies that gargage slot, as you will see during in testing with less cars running. I was’nt sure whether i have done enough with this to warrant another Silverstone release. but thought I would offer you the chance to try it out ?

Merry Christmas and good cheers to you all,