Skip to content
You are here
Silverstone 1979 GPC for GTR2 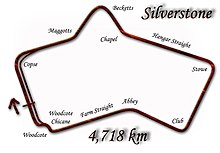 The 1979 British Grand Prix (formally the XXXII Marlboro British Grand Prix) was a Formula One motor race held at Silverstone on 14 July 1979. It was the ninth race of the 1979 World Championship of F1 Drivers and the 1979 International Cup for F1 Constructors.

The 68-lap race was won by Clay Regazzoni, driving a Williams–Ford. It was the first Formula One victory for the Williams team. René Arnoux finished second in a Renault, with Jean-Pierre Jarier third in a Tyrrell-Ford.

Qualifying saw Alan Jones take his and the Williams team’s first pole position by 0.6 seconds from Jean-Pierre Jabouille in the Renault; the Williams FW07 had been modified by engineers Patrick Head and Frank Dernie to correct some aerodynamic problems on the car. Nelson Piquet took third in the Brabham with the second Williams of Clay Regazzoni alongside him on the second row, while René Arnoux in the second Renault and Niki Lauda in the second Brabham made up the third row. Completing the top ten were John Watson in the McLaren, the Lotuses of Carlos Reutemann and Mario Andretti, and Jacques Laffite in the Ligier. The Ferraris disappointed, with championship leader Jody Scheckter only managing 11th and Gilles Villeneuve 13th.

At the start of the race, Regazzoni charged into the lead, but was repassed by team-mate Jones and Jabouille before the end of the first lap. Andretti and the Ferraris also made fast starts, running close to Piquet, Lauda and Arnoux. At the end of lap 2, Piquet made a mistake at Woodcote and spun off, before Andretti dropped out with a broken wheel bearing on lap 4. Then Lauda encountered brake problems which eventually led to his retirement on lap 13, leaving Arnoux fourth with Scheckter fifth and Villeneuve dutifully following the South African.

Up at the front, Jones established a commanding lead over Jabouille, who was struggling on Michelin tyres that were wearing quickly. On lap 17, the Frenchman pitted for new tyres, promoting Regazzoni to second. However, disaster struck for Jabouille when, after a long stop, part of his front wing got caught in an air hose that had not been removed from under the car and was broken off as he accelerated. He was forced to return to the pits for repairs, during which his turbo overheated.

This is based on the earlier Silverstone79 found in the silverstone collection, now uploaded as a seperate track for any league use, plus while i was about it, added some extras, so this has new grass, GTR2 type start and pit lights, but the major difference is the altered chicane section to be more representative of the 79 layout.

Based on old the F1 Challenge track, that Carrera4 remodelled into silverstone88, and then the GPC Team remodelled into a 79version for the GPC79mod trackpack for rFactor.