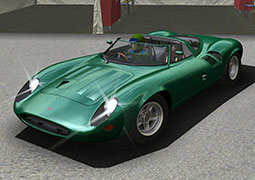 The Jaguar XJ13 was a prototype racing car developed by Jaguar Engineering Director William Heynes to compete at Le Mans in the mid 1960s. It never raced, and only one was produced. The car has not been officially valued, but a £7 million bid for it was declined by the owners in 1996. It was more than 3 times the price of a Ferrari 250 GTO at the time.