Skip to content
You are here
Dijon-Prenois 2005 for GTR2

This might be the first ‘official’ release, but I’m not the one who did the actual convertion. A gentleman called ‘Dangerous Beans’ did the conversion at a time when converting from GTL->GTR2 was still considered very illegal. I decided to do an ‘official’ release (at last). Sunalp did already release Mondello and Zolder from GTL. I just released the other two.

Dijon-Prenois is a 3.801 km (2.362 mi) motor racing circuit located in Prenois, near Dijon, France. The undulating track is noted for its fast, sweeping bends. 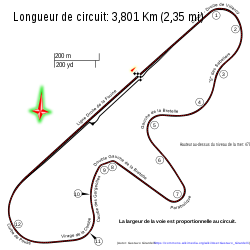 Planned in 1967, work commenced in December 1969. The track was part of a plan to make Dijon an automotive centre. It was the brainchild of rugby-player and wrestler François Chambelland (sometimes assumed to be the masked wrestler l’Ange Blanc), and was developed with the aid of racers Jean-Pierre Beltoise and François Cevert, as well as motoring journalist José Rosinski. In spite of lack of support from the city government and a chronic lack of funds, the track was declared open on 26 May 1972, with Guy Ligier making the first timed lap around the circuit. The first race, for 2-litre prototypes, was held ten days later. Arturo Merzario was the inaugural winner.

The first F1 race was run in 1974 on the circuit’s original 3.289 km (2.044 mi) layout; with the fastest lap times under the one-minute mark, there was a major problem with congested traffic between the race leaders and the back-markers. Therefore, in 1976 an extension was added to lengthen the circuit as well as to reprofile many of its corners before the time F1 could return to Dijon in 1977. The 1979 French Grand Prix featured a memorable battle for second place in the final laps between Gilles Villeneuve’s Ferrari and René Arnoux’s Renault, which was finally won by Villeneuve. The race itself was won by Jean-Pierre Jabouille in the other Renault – Renault’s first, and the first F1 victory for a turbocharged car.

This track was incuded with GT Legends by Simbin. It’s the 2005 version of the track. It has been around as a GTR2 conversion for a long time, but was considered illegal. Since Simbin’s last statement about conversions from older games, this track can at last be ‘officially’ released.

– Just repacking a few bits and added the LODS by TAKU

PLEASE CONTINUE TO SUPPORT SIMBIN BY BUYING THEIR GAMES.