Permission for improvements by khan1670 granted.

The Grand Prix of Long Beach is an IndyCar Series race held on a street circuit in Long Beach, California. Christopher Pook is the founder of the event. It was the premier race on the CART/Champ Car calendar from 1996 to 2008, and the 2008 race was the final Champ Car series race prior to the formal unification and end of the open-wheel “split” between CART and IRL. Since 2009, the race has been part of the unified IndyCar Series. For most of its history, the race has traditionally been held in April. It is one of the longest continuously-running events in Indy car racing, and with its rich history, is considered one of the most prestigious events on the circuit. 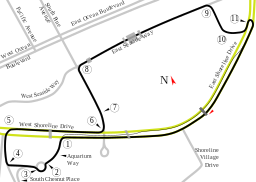 The Long Beach Grand Prix is the longest running major street race held in North America. It started in 1975 as a Formula 5000 race, and became a Formula One event in 1976. Incredibly, in an era when turbocharged engines were starting to come to prominence in Formula One, Long Beach remains one of the few circuits used from the time Renault introduced turbos in 1977 until the last Long Beach Grand Prix in 1983 that never once saw a turbo-powered car take victory.

In 1984, the race switched from a Formula One race to a CART Indy car event. Support races over the years have included Indy Lights, IMSA, Atlantics, Pirelli World Challenge, Trans-Am Series, Formula D, Stadium Super Trucks, Formula E, and the Toyota Pro/Celebrity Race. Toyota was a sponsor of the event since its beginning and title sponsor from 1980 to 2018, believed to be the longest continuously running sports sponsorship in the U.S.

– 2009 Version taken for ALMS Version
– fixed a mistake in the trk-file
– repacked all needed Files
– new gdb adjusted to ALMS Race Distance (2 hours)
– complete new AIW with new Paths and Racing Line
-> Garage and PitSpots taken from original AIW
-> there were already 96 Garage Spots and 32 Pit Spots, 3 cars per pit, but not unused
-> I’ve made them usable
-> of course Groove Alpha added to

Some call Long Beach as the American Monaco. For me it’s just a wide Street Circuit. Racing there with 96 cars will surely cause a lot of crashes, you just can’t avoid it, but it also depends on the kind of cars you take. Drive with 96 Mini Coopers and I’m sure you won’t see that big problems. Drive with 50 GT1 and GT2 Cars and you will get problems.

anyway, have fun and enjoy !