Skip to content
You are here
Road Atlanta 2016 for GTR2

Thanks to Uzzi who kindly gave me permission to convert his nice rFactor version
to all SimBin platforms (GTR2, GTL & Race07 series).

Michelin Raceway Road Atlanta is a 2.54-mile (4.088 km) road course located just north of Braselton, Georgia, United States. The facility is utilized for a wide variety of events, including professional and amateur sports car and motorcycle races, racing and driving schools, corporate programs and testing for motorsports teams. The track has 12 turns, including the famous “esses” between turns three and five; and Turn 12, a downhill, diving turn. The track is owned by IMSA Holdings, LLC through its subsidiary Road Atlanta, LLC, and is the home to the Petit Le Mans, as well as AMA motorcycle racing, and smaller events throughout the year. Michelin acquired naming rights to the facility in 2018. 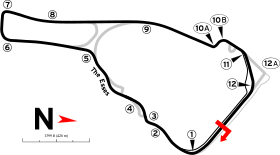 In 1969, David Sloyer, Earl Walker, and Arthur Montgomery purchased a 750 acres (300 ha) plot of farmland in Braselton, Georgia, with the intent to build a world-class road racing facility. When a Can-Am race had to be canceled due to flood damage, the series organizers chose Road Atlanta to replace it. The track then began to take form quickly, taking only six months to excavate, grade, and pave the road course.

For these changes compared to the original version of rFactor, I used several youtube videos of 2015 and 2016 from TransAm race series and others, and several pictures as templat of the same years.

I thank my friend TheSky, who reviewed the AIW which was very problematic, especially at the parking area and the penalty mark. Without the work done by TheSky at the AIW I could not have offered you this conversion !

For the update of the circuit and part of the new 3D objects, one or more textures were created with images of CGTEXTURES.COM. These images can not be redistributed by default, please visit please www.cgtextures.com for more informations.

Thanks to GTR233 for reporting this issues.

Do not forget to thank also the original author Uzzi, without his modeling work, this circuit would not be available.

For more informations, read the original credit file, located in the root directory of the circuit.