Skip to content
You are here
Roebling Road Raceway for GTR2

Roebling Road Raceway, formerly Savannah International Raceway, is a 2.02-mile (3.25 km) road racing course located just outside Bloomingdale, Georgia. Opened in 1959, Roebling Road is relatively unique amongst racetracks in that it lacks any accommodations for spectators; there are no grandstands, no picnicking areas, nor any other sort of viewing facilities. The track was designed by John Rueter and held its first Sports Car Club of America event June 11–12, 1960. The track was financed by and named after SCCA supporter Robert Roebling, great-grandson of John A. Roebling. 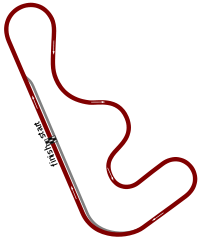 The track is a very safe and forgiving track, making it ideal to learn on. It is characterized by large amounts of run-off room and only a single wall.

Roebling is unusual in that it is owned by a local racing club, the Buccaneer Region of the SCCA. Roebling is a not-for-profit, non-spectator oriented track.

Roebling hosts several driver’s education oriented events each month. The format varies with the hosting organization. There are relatively expensive events where the organizers provide high performance cars and, there are significantly less expensive events where drivers bring their own cars. As drivers work their way up in skill level, they are allowed to drive on the track “solo”.

The GTR2 track is conversion from the rFactor version made by Andy55. I thought it would be an easy conversion, but it turned in a complete make-over based on youtube video’s with a new pit entrance. Also the AIW is completely redone as it was only a basic AIW with some serious problems. However I copied 1 to 1 the racegroove as it gives a nice flavour to the track surface.

Install the track inside your GTR2 folder:
……GTR\GameData\Locations\