Skip to content
You are here
Silverstone GP 2011 for GTR2 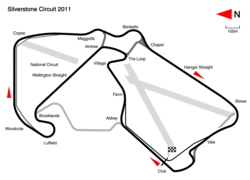 The 2011 British Grand Prix was a Formula One motor race held on 10 July 2011 at the Silverstone Circuit in Northamptonshire and Buckinghamshire, England, and won by Fernando Alonso. Changes to the circuit mean that the race was previously classified as being in Northamptonshire, but the movement of the start-finish line means that the race is now officially classed as being in Buckinghamshire. It was the ninth race of the 2011 season, and saw the introduction of a ban on off-throttle blown diffusers, the practice of forcing the engine to continue to produce exhaust gasses to generate downforce when drivers are not using the throttle.

The circuit underwent a major reconfiguration for the 2010 British Grand Prix, with the addition of the “Arena” loop bypassing the old Abbey, Bridge and Priory corners before re-joining at Brooklands. The 2011 race saw the second stage of this reconfiguration used for the first time, with the pits and the start/finish line moved to the straight between Club Corner and the new Abbey. The new pit facility was deliberately designed to be challenging for drivers, and to minimise the amount of time spent in the pits. The entry lane branches off from the circuit on the approach to Vale and Club – one of the slowest sections of the circuit – allowing a pitting driver to continue to accelerate while others are forced to slow for the corner. The pit lane itself does not run parallel to the main straight, but rather is angled at five degrees to make the corner at the entry to the pit lane slightly faster. Red Bull Racing team principal Christian Horner noted that the pits are lower than the circuit proper, and that he believed that drivers would have to treat the corner at the entry to the pit lane as they would a corner on the circuit.

This is based on my earlier release of 07Silverstone, most of the layout was made by ISI, but to make this into the 2011 layout some track parts and extra grandstands that are included. Thanks and credit to FCMG as some parts were converted from FCMG’s 2011 track work for their rFactor release.

Athough a lot of the textures are from my 07 release, i did some extra modelling, additional parts and changes to some existing pieces, smoothing of some turns, made the new “Wing” pit building and textures (the garages included in the the wing pits are from the original Silverstone by ISI).

I only adapted them and made slight alterations to emulate the new pits as used in 2011.
Rain reflections and GTR2 style lights, also animated marshals added.

FCMG has released their 2011 SILVERSTONE BRITISH GP (Wing Circuit) add-on for ISI Northamptonshire.
* ESCALERO.DDS (stairs) borrowed from macci dESIGN
This is an open mod, for use in public and private (league) servers.
If you intend to make changes to this mod, (and publish it) just give FCMG credit mention.
It is not authorized for any commercial, or for profit use without FCMGmods.com permission.
If you have any questions or comments, please visit FCMGmods.com forums.