I thank philrob who kindly gave me the permission for the conversion of its GTL version to platforms GTR2 & Race07.

The Baku City Circuit is a motor racing street circuit located in Baku, Azerbaijan constructed near Baku Boulevard. A lap of the circuit is 6.003 kilometres (3.730 mi), making it the second-longest circuit on the Formula One calendar (after Circuit de Spa-Francorchamps). The inaugural Formula One race at the circuit was the 2016 European Grand Prix and its support events. A year later, in 2017, the circuit held the inaugural Azerbaijan Grand Prix. The event is organised by Baku City Circuit Operation Company. 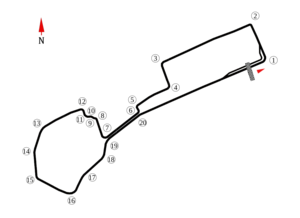 In December 2013, Formula One President and CEO Bernie Ecclestone suggested that the race would be run in 2016 but later said that because the Korean Grand Prix organisers were in breach of contract, it would be moved to 2015. However, in July 2014 it was announced that the race’s debut would be delayed until 2016.

The six kilometre, anti-clockwise layout of the circuit was designed by circuit architect Hermann Tilke. The circuit was planned to start adjacent to Azadliq Square, then loop around Government House before heading west along a 1 km straight to the Palace of the Shirvanshahs and Maiden Tower. Here, the track was planned to have a narrow 7.6 m (25 ft) uphill traversal and then circle the Old City before opening up onto a 2.2 km (1.4 mi) stretch along Neftchilar Avenue back to the start line. The circuit was projected to be the fastest street circuit in the world, with a top speed close to 360 km/h and the second longest circuit on the current F1 calendar behind the Circuit de Spa-Francorchamps in Belgium.

I know some other things are still missing, I will try to complete it.
Please notify if you miss something, I only tested it in time attack.

Do not forget to thank also the original author philrob, without his work of realization, this circuit would not be available.

philrob : converted Marek Adamus rFactor Baku track to GTL with these modifications in 2017 :

i have set max AI to 20 the AIW says more but they are more stable at 20, you could raise this.
better FPS and smoother running now, but could still be improved, 3d models are very heavy.