Skip to content
You are here
Croft Circuit for GTR2

GTR2 Conversion and revised by Pawel and BillBro

Croft Circuit is a motor racing circuit located near Dalton-on-Tees in North Yorkshire, England. The tarmac circuit is just over 2 miles (3 km) long and is based on the lands of an airfield, but has long since moved on from being a basic airfield circuit. The circuit holds meetings of the British Touring Car Championship, British Rallycross and Pickup Truck Racing race series. 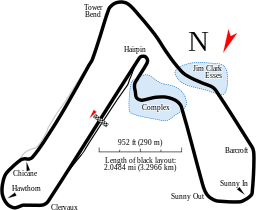 The British Superbike Championship left the calendar following the 2011 season and is not yet scheduled to return to Croft.

I’d like to present my conversion of Croft Circuit to GTR2.

It’s a legendary combo-circuit located in England and a place of BTCC races year by year.

Well, this is a very sentimental work for me, because I always wanted to have good version of Croft in my GTR collection of tracks. So I made it by myself 😉

Conversion of rFactor2 track made by senormen.

Main conversion and CAM file made by me (Pawel).

Special thanks goes to BillBro who helped me in many things like:
AIW file rebuilding, materials naming and overall optimalizations.