Skip to content
You are here
Dijon-Prenois 2011 for GTR2

Dijon-Prenois is a 3.801 km (2.362 mi) motor racing circuit located in Prenois, near Dijon, France. The undulating track is noted for its fast, sweeping bends. 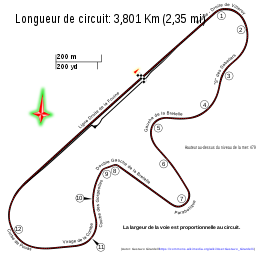 Planned in 1967, work commenced in December 1969. The track was part of a plan to make Dijon an automotive centre. It was the brainchild of rugby-player and wrestler François Chambelland (sometimes assumed to be the masked wrestler l’Ange Blanc), and was developed with the aid of racers Jean-Pierre Beltoise and François Cevert, as well as motoring journalist José Rosinski. In spite of lack of support from the city government and a chronic lack of funds, the track was declared open on 26 May 1972, with Guy Ligier making the first timed lap around the circuit. The first race, for 2-litre prototypes, was held ten days later. Arturo Merzario was the inaugural winner.

Here’s an update of the Dijon 2005 version from GTR2, this was first released for rFactor and now I’ve added this track to GTR2.
All that was done here was a texture update and everything else is the same from Dijon 2005. I’m going to keep looking at other
tracks that need texture updates. I’m thinking Donnington or Laguna Seca next. Enjoy!