This is my conversion of Reiza Studio’s Formula Truck.
All credits go to Reiza Studios for these nice trucks !

first i want to say, this is an excellent converted mod by merlin75 – he did a great job !

i haven’t made any changes on physics and skins etc., i just corrected / improved
things which I noticed when looking through the cars.

what i have done :

extract with WinRAR or else and drop the GameData folder into your
GTR2 main-directory – allow to overwrite existing one with “YES ALL” – done.

Fórmula Truck was a Brazilian motorsport series, competed in by truck tractor units.

The concept originated from discussions between Aurélio Batista Félix, a truck driver from Santos, and Portuguese journalist Francisco Santos.

On September 6th 1987, the first race took place at the circuit Autodromo Internacional de Cascavel in Paraná. The trial involved 35 competitors and was named, I Copa Brasil de Caminhões (1st Brazil Trucks’ Cup), and served as a test to ascertain the safety of this new type of race. However, there was a fatal accident involving one of the participants: Jeferson Ribeiro da Fonseca, a driver who was also the president of Autodromo Internacional de Cascavel. This disturbed the project, resulting in Francisco Santos being made to leave three years later.

In 1994 safety was made a priority for the creation of a new event for truck drivers and businessmen in the sector at the Interlagos circuit in São Paulo. The consolidation begun in 1995, with the four trials, held in the cities of Cascavel and Londrina (PR), Tarumã (RS) and Goiânia (GO). In the latter city, the crowds were over 120,000 people.

The first championship with defined rules took place In 1996, and was approved by the Confederação Brasileira de Automobilismo (Brazilian Automobile Confederation). The first official competition took place in Guaporé (RS), and had 13 trucks on the grid.

On March 5, 2008, the creator of Formula Truck, Aurélio Batista Félix, died of a stomach hemorrhage. He had heart problems and suffered a heart attack in the first stage of the 2008 season, which had been held in Guaporé. 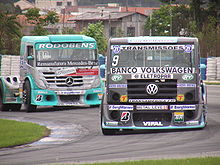 The models, skins and all other content of this mod are for private use only.
Commercial use of this modification is strictly prohibited.
All Registered Trademarks and Copyrights are property of their respective owners.

®2013 Reiza Studios. All rights reserved.
Other trademarks are property of their respective owners and used under license.