Skip to content
You are here
Goldenport Park 2010 for GTR2

Thank you Raceking for permission to convert your great track to GTR2 !

Goldenport Park Circuit is a permanent circuit in Jinzhanxiang, Chaoyang District, Beijing, People’s Republic of China (10 km North of Beijing) designed by Australian Michael McDonough. The circuit was opened in December, 2001 and the development also includes a 4X4 Course, a cinema, a motel and a trading place named as “Auto Mall” trading new and second hand cars. 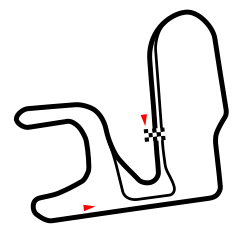 It held the Beijing round of China Circuit Championship (CCC) for touring cars and China Superbike Championship (CSBK). The circuit became a replacement round of the 2011 FIA GT1 World Championship season after the Curitiba round had been cancelled. The race took place the week after the round held in Ordos, which is also located in China.

In 2014, Goldenport was added to the 2014 World Touring Car Championship season calendar after logistics regarding shipping for overseas rounds forced the FIA to remove the United States race at Sonoma Raceway in California, and add the third Chinese race (Shanghai and Macau are the other two).

The circuit is 2.4 km (1.49 mi) long in distance with the width between 12m – 20m. It is a FIA Class 4 Homologated Circuit with 2 grandstands and 25 pit garages. The circuit has a very smooth surface and very little grip on several sections.

Permission was granted in 2007 by Raceking, date on which I had proposed my first version on my old site (gtrtrax.net) site which does not exist anymore, and I had not rained given following this circuit for various reason.

I have found that the circuit in real and since 2006, had several modification on the level as of stands and step, and that several infrastructure had been built, and other modified buildings.

For the update of the circuit and part of the new objects (3D) one or more textures were created with images of CGTEXTURES.COM. These images cannot be redistributed by defect, please visit www.cgtextures.com for more informations.

I thank Thierry81 who created a new AIW for 35 cars and for devotion.

I also thank Boblebric for the video TV screens, and also thanks to Luigi for these excellent cameras.

This version will not have conflicts with the Goldenport 2006 version by Gobi !