Skip to content
You are here
Le Mans 2016 for GTR2

The Circuit des 24 Heures du Mans, also known as Circuit de la Sarthe (after the 1906 French Grand Prix triangle circuit) located in Le Mans, Sarthe, France, is a semi-permanent motorsport race course chiefly known as the venue for the 24 Hours of Le Mans auto race. Comprising private, race-specific sections of track in addition to public roads which remain accessible most of the year, its present configuration is 13.626 kilometres (8.467 mi) long, making it one of the longest circuits in the world. Capacity of the race stadium, where the short Bugatti Circuit is situated, is 100,000. The Musée des 24 Heures du Mans is a motorsport museum located at the main entrance of the venue. 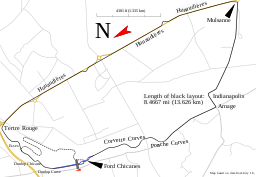 Up to 85% of the lap time is spent on full throttle, putting immense stress on engine and drivetrain components. However, the times spent reaching maximum speed also mean tremendous wear on the brakes and suspension as cars must slow from over 320 km/h (200 mph) to around 100 km/h (60 mph) for the sharp corner at the village of Mulsanne.

This is a texture update for the great track originally converted by Frank.55 to GTR2.
Further updated by The Psy and RacerM to the finally 2009 version.

All Credits goes to Frank.55, The Psy and RacerM !

Because i still using this 2009 version for my GTR2 24h races each year one week after
the real deal, it was my idea to upgrade the track to 2016 texture-specs. Ive studied all the
Eurosport vids to re-design the 2016 billboards and other stuff.

– zipped all .gmt and .dds files to .gtr
– updated this ReadMe