Skip to content
You are here
Milwaukee Mile 1998 for GTR2

The Milwaukee Mile is an approximately one mile-long (1.6 km) oval race track in the central United States, located on the grounds of the Wisconsin State Fair Park in West Allis, Wisconsin, a suburb west of Milwaukee. Its grandstand and bleachers seated approximately 37,000 spectators. Paved 66 years ago in 1954, it was originally a dirt track. In addition to the oval, there was a 1.8 mile (2.8 km) road circuit located on the infield. 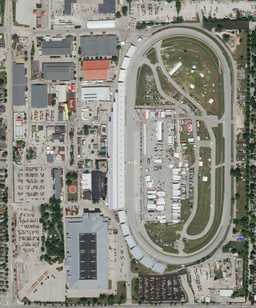 As the oldest operating motor speedway in the world, the Milwaukee Mile has hosted at least one auto race every year from 1903 to 2015 (except during U.S. involvement in World War II). The track has held events sanctioned by major bodies, such as the AAA, USAC, NASCAR, CART/Champ Car World Series, and the IndyCar Series. There have also been many races in regional series such as ARTGO.

I can’t find much about these tracks as far as giving credit. For Milwaukee, the track was created by jpalesi. I got a delivery error from his e-mail address. Initial release was on August 29, 2010. The Nazareth track had no information at all. If anyone knows who created it, please let us all know.

Milwaukee will support a field of 36 cars, Nazareth will handle 44. The AI aren’t too fast. Not sure why. Maybe they just need a good setup.

extract the .rar file with WinRAR or similar unpacker and drop the track-folder into your GTR2\GameData\Locations\…directory – done.