Skip to content
You are here
Nazareth Speedway for GTR2

Nazareth Speedway was an auto racing facility near Nazareth in the Lehigh Valley region of Pennsylvania which operated from 1910 to 2004 in two distinct course configurations. In its early years, it was a dirt twin oval layout. In 1987 it was reopened as a paved tri-oval that measured just slightly under 1 mile. The facility is often linked to local drivers Mario and Michael Andretti’s early racing careers. It was also associated with Frankie Schneider due to his large number of wins on the two dirt tracks. As of November 2015, the site was purchased by Raceway Properties LLC under David Jaindl. There are no current plans to return racing to the facility.

The paved track opened in 1987 and closely resembled the 1.125-mile dirt track layout. However, the length was shortened, and the turns were reconfigured to widen the radii. Though advertised as a 1-mile tri-oval, it actually measured less than one mile in length. The banking varied between 2.7° and 6.0°. The back straight was 1200 feet and main straight was 800 feet. Participants were known to exploit the inaccurate measurement for fuel strategy, knowing that they were running a shorter distance than officially advertised. 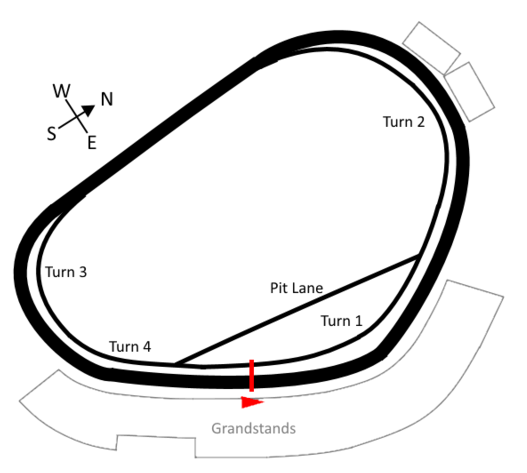 I can’t find much about these tracks as far as giving credit. For Milwaukee, the track was created by jpalesi. I got a delivery error from his e-mail address. Initial release was on August 29, 2010. The Nazareth track had no information at all. If anyone knows who created it, please let us all know. Milwaukee will support a field of 36 cars, Nazareth will handle 44. The AI aren’t too fast. Not sure why. Maybe they just need a good setup.