Oran Park Raceway was a motor racing circuit at Narellan in southwestern Sydney, New South Wales, Australia which was operational from February 1962 until its closure in January 2010.

The circuit was established by the Singer Car Club, with its opening meeting held on the weekend of 17–18 February 1962. The land for the circuit was provided by wealthy Camden grazier Dan Cleary, who also ran an earthmoving business, which provided the equipment used to help build the circuit. A motorcycle race meeting was held on 17 February 1963, with reigning Grand Prix Champion Jim Redman being the star attraction. Redman won nearly every class and set the lap record of 50.4 seconds, only 0.8 seconds slower than Frank Matich‘s outright time set in a 2.6 litre Lotus Sports Car. 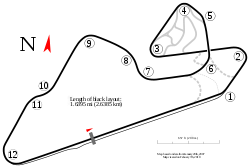 The original lap distance of 1.0 miles (1.6 km) was later extended to 1.21 miles (1.9 km) with a further extension in 1974 creating an alternative “Grand Prix” circuit of 1.63 miles (2.62 km) in length. The Grand Prix circuit featured a figure-eight shape with a bridge where the track crossed over itself. Despite the loop the racing direction was still regarded as being anticlockwise.

Oran Park Raceway has several track layouts. It was established on 1 January 1963 with the current South Circuit. The full track (“Grand Prix Circuit”) was added in the early 1970s. It is a 2.7 kilometre figure-eight shape with a bridge where the track crosses itself. Despite the loop in the longest track shape, the circuit is regarded as racing anticlockwise.

The GTR2 track features 4 layouts to race on :

For GTR2 the track has been cut up into peaces to save FPS and get rit of FPS hits when there is a crash. And ofcourse all the GTR2 essentials like Rain reflections animated marshall etc etc are added. Mr Ingal even putted ina nice extra bonus for ya all.

– No serious bugs acured during testing of the last beta.