Pau67 was build from the scratch for GPL by Alain Bosco who kindly agreed to a GTL/GTR2 conversion.
– my biggest respect for his kind work –

Parker0065 did a great job in converting the GPL version to rF and agreed to GTL/GTR2 version also.
Pls. notice his original readme in the archive.

This Conversion is based on the GTL version from derDumeklemmer.

– Alain Bosco for his GPL version
– Parker0065 for his rF version
– derDumeklemmer for his RTL version
– !Sonic! and FrankyBB for the LOD

The Pau Grand Prix (French: Grand Prix de Pau) is a motor race held in Pau, in the Pyrénées-Atlantiques department of southwestern France. The French Grand Prix was held at Pau in 1930, leading to the annual Pau Grand Prix being inaugurated in 1933. It was not run during World War II.

The race takes place around the centre of the city, where public roads are closed to form a street circuit, and over the years the event has variously conformed to the rules of Grand Prix racing, Formula One, Formula Two, Formula 3000, Formula Three, Formula Libre, sports car racing, and touring car racing.

The race is run around a street circuit, the “Circuit de Pau-Ville” laid out round the French town, and is in many ways similar to the more famous Formula One Monaco Grand Prix. About 20 km to the west of the city, there is a 3 km long club track named Circuit Pau-Arnos.

For the event, cars are set up with greater suspension travel than is typically utilised at a purpose-built racing circuit to minimise the effect of running on the more undulating tarmac of the street circuit. 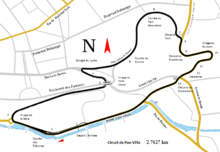