Skip to content
You are here
Paul Ricard 1975 for GTR2

The Circuit Paul Ricard is a motorsport race track built in 1969 at Le Castellet, near Marseille, in France, with finance from the eccentric pastis magnate Paul Ricard. Ricard wanted to experience the challenge of building a racetrack. 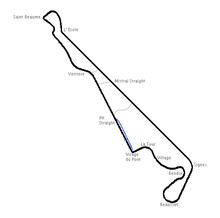 The track is characterised by its long Mistral straight (1.8 km, 1.1 mi) and elongated track design. The track is also unusual in that it is built on a plateau, and is very flat. In 1986 the track was modified to shorten the circuit, by adding shortcut through to the middle of the Mistral Straight. This shorter circuit is also known as the GP short circuit and is 3.813 km (2.369 mi) long. The track offers 167 possible configurations from 0.826 km (0.513 mi) to the full 5.861 km (3.642 mi). The track’s elevation ranges from 408 to 441 m (1,339 to 1,447 ft) above sea level. Its flexibility and mild winter weather mean that it is used for testing by several motorsport teams, including Formula One teams.

The track is known for its distinctive black and blue run-off areas known as the Blue Zone. The runoff surface consists of a mixture of asphalt and tungsten, used instead of gravel traps, as common at other circuits. A second, deeper run-off area is the Red Zone, with a more abrasive surface designed to maximize tyre grip and hence minimize braking distance, although at the cost of extreme tyre wear. The final safeguard consists of Tecpro barriers, a modern improvement on tyre barriers.

this 75 version is based on Carrera.4`s excellent version of Paul Ricard 1988 v1.0 that he scratch built for rFactor, fortunately he had also included the partly created mesh work for the longer variant of the layout.

Initially I did this extended version for use with the excellent Crew`s 75/75 mod for F1challenge with Carrera.4 `s permission, updated textures and added the extra curbs, barriers, and all the missing parts that the original meshwork needed.

to make this a drivable long version of Paul Ricard from 70`s, still some tweaking to do ? recently I was asked to do it for Rfactor for a friend , so then converted it to Rfactor and then  did a GTR2 version (it includes rain reflections and ani marshalls).