Skip to content
You are here
Paul Ricard 1988 for GTR2

Paul Ricard 1988 was build from the scratch for rFactor by Carrera.4 who kindly gave Dumeklemmer his permisson to convert all his current and upcomming tracks to GTL/GTR2.

A very BIG “Thank you so much” for this kind offer !

This scratch build is a real masterpeace, the very best I ever saw !
From geometry over textures up to the AIW he did a real perfect job.

What Wikipedia mentioned about Paul Ricard :

The Paul Ricard Circuit is a motorsport race track built at Le Castellet, near Marseille, France, in 1969 with finance from the eccentric drinks magnate Paul Ricard, who created what essentially became Pernod Ricard. With innovative facilities it was considered by some to be the safest motor racing in the world at the time. The circuit had three possible layouts, a large area of industrial park and also an airstrip. In combination with the usual good weather conditions in Southern France, the airfield made the track popular for testing purposes in winter. 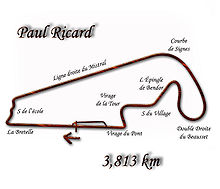 The original track was dominated by the mile-long Mistral Straight that was followed by the high-speed Signes corner. It opened in 1970 with a 2-liter sports car race. During the 1970s and the 1980s the track developed some of the best French drivers of the time, and hosted the Formula One French Grand Prix on many occasions, the first of which being the 1971 French Grand Prix. In 1986 Formula One driver Elio de Angelis was killed in a testing accident at the fast first turn, and the circuit was modified in order to avoid any future accidents.

Such modifications consisted of shortening the circuit in order to reduce the Mistral Straight and to eliminate the fast sweeping curves where de Angelis had crashed. The last French Grand Prix held at the circuit was in 1990; since then, Magny-Cours has played host to the French Grand Prix. In the 1990s the circuit’s popularity was reduced to motorcycle racing and French national racing. The track was also the home of the ORECA F3000 team.

After Ricard’s death, the track was sold to Excelis, a company owned by Formula One promoter Bernie Ecclestone, in 1999. The track has since been rebuilt into a very advanced test track.  It is now known as the Paul Ricard High Tech Test Track.

The track is characterised by its Mistral Straight and elongated track design. The track is also unusual in that it is built on a plateau, and very flat. The length of the full track is around 3.610 miles. In 1986 the track was modified to shorten the circuit. This shorter circuit is known as the GP short circuit and its length is 2.369 miles. The track’s length has a lot of variaton, according to its offical home page, the number of the varioations is 180. Because of this several solution many sports use this track for testing (ex. Formula One).

– Carrera.4 for his fantastic rF version
– Our girlfriends for their patience and understanding.