Skip to content
You are here
Red Bull Ring for GTR2

The Red Bull Ring is a motorsport race track in Spielberg, Styria, Austria. 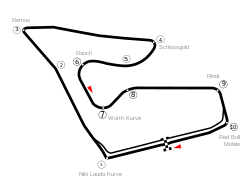 The race circuit was founded as Österreichring and hosted the Austrian Grand Prix for 18 consecutive years, from 1970 to 1987. It was later shortened, rebuilt and renamed the A1-Ring (A Eins-Ring), and it hosted the Austrian Grand Prix again from 1997 to 2003. When Formula One outgrew the circuit, a plan was drawn up to extend the layout. Parts of the circuit, including the pits and main grandstand, were demolished, but construction work was stopped and the circuit remained unusable for several years before it was purchased by Red Bull‘s Dietrich Mateschitz and rebuilt. Renamed the Red Bull Ring the track was reopened on 15 May 2011 and subsequently hosted a round of the 2011 DTM season and a round of the 2011 F2 championship. Formula One returned to the circuit in the 2014 season.

I want to thank Treibie who first converted this track to Rfactor. Treibie did all the heavy lifting, he did the original AIW, TRK AND CONVERSIONS that got the track working in rfactor. I also want to thank him for his permission and knowledge both of which he has freely given me with much appreciation. THANK YOU TREIBIE !

I also want to thank Terry from TFL Forum. He was the main guy who reworked the AIW and CAMS so that the track could handle a large grid and corrected the aiw lines for smoother competition. This track would not even be drivable in GTR2 with his major contribution, thank you TERRY !

Once I converted the track to GTR2 I edited some of the texture to tone down some of the grass. The skyboxi was a MOMA to work with to get it to show properly. I also deleted alot of the unnecessary models and corrected alot of the materials. I also added all the new adverts to the track as they appear during the DTM races.

This track is in no way what I have planned for it. There is a lot more I plan to do with it. My business has taken up a large part of my life now so my passion for track modding continues but has had to take a back seat to my business concern. I have been sitting on this track for months but I really wanted to get it out for the F1 Grand Prix.

This is only stage one this meaning :

1. This track is from GRID. It represents the early re-construction of the track in the DTM CONFIGURATION.

2. I will be adding spectators, trees and sounds as well as rain reflections.

extract with WinRAR or else and drop the track-folder into your
GTR2\GameData\Locations\…directory – done.

DO NOT AND I SAY PLEASE DO NOT POST THIS TRACK TO ANY OTHER SITES THAT I HAVE NOT WITHOUT MY PERMISSION. Treibie wanted this track to stay out of certain hands and I don’t blame them.

DO NOT EMBARASS YOURSELF AND TRY AND CLAIM YOU MADE THIS TRACK BECAUSE I HAVE ADDED MARKER THAT CAN PROVE THAT TREIBIE AND I DID THIS TRACK. OTHER THAN THAT PLEASE ENJOY YOURSELF AND THANK YOU FOR DOWNLOADING.