Skip to content
You are here
Reims-Gueux for GTR2

This track is a significantly updated conversion from the rFactor version of the circuit.

Andrew Gameson for the intial GPL release of the circuit.
Bud Lucas for the rFactor conversion.
Sunalp2 for AIW file updates and animated marshals.
Kuato for grass add and multi maps.
TICTOC all the other stuff.

The circuit Reims-Gueux was a Grand Prix motor racing road course, located in Gueux, 7.5 km west of Reims in the Champagne region of north-eastern France, established in 1926 as the second venue of the Grand Prix de la Marne. The triangular layout of public roads formed three sectors between the villages of Thillois and Gueux over the La Garenne / Gueux intersection of Route nationale 31. The circuit became known to be among the fastest of the era for its two long straights (approximately 2.2 km in length each) allowing maximum straight-line speed, resulting in many famous slipstream battles. 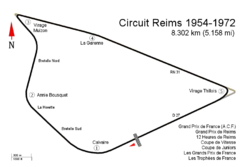 Motor racing started in 1926 with the second Grand Prix de la Marne, relocating the race from the square-shaped 22 km Circuit de Beine-Nauroy east of Reims to Reims-Gueux, west of Reims. The original 7.816 km circuit placed the start/finish line on road D27, approximately 1.6 km east of the Gueux village center, where it would remain for the duration of the circuit. Gradual improvements in track width to a few sections including the Garenne-Gueux / Thillois corners prior to the 1932 Grand Prix de France contributed to a new published circuit length of 7.826 km after which the circuit remained essentially the same until 1937.

To install, copy the ‘Reims’ folder to your ‘GTR2\GameData\Locations’ folder.