Skip to content
You are here
Sandown IR 2006 for GTR2

Sandown International Raceway is a motor racing circuit in the suburb of Springvale in Melbourne, Victoria, approximately 25 kilometres (16 mi) south east of the city centre. Sandown is considered a power circuit with its “drag strip” front and back straights being 899 and 910 metres long respectively. 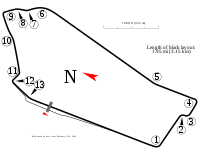 Sandown Racecourse was first built as a horse racing facility, dating back into the 19th century, but closed in the 1930s in a government run rationalisation program. Redevelopment began not long after World War II. A bitumen motor racing circuit was built around the outside of the proposed horse track (which was not completed until 1965) and was first opened in 1962 and held the race which became the Sandown 500 for the first time in 1964. The circuit hosted its first sprint round in 1965.

The opening meeting, held on the 11th and 12th of March 1962, featured the 1962 Sandown International Cup, which was contested by world-famous international drivers including Jack Brabham, Jim Clark, Stirling Moss, Bruce McLaren and John Surtees. A second Sandown International Cup was held in 1963, the two races serving as the forerunners of the Sandown round of the annual Tasman Series from 1964 to 1975. Throughout the 1960s and 1970s the race meetings continued to attract international stars along with the best of Australia’s drivers.

Australia’s traditional Holden/Ford rivalry really surfaced at the track in the late 1960s and through the 1970s with drivers such as Norm Beechey, Ian Geoghegan, Allan Moffat, Bob Jane, Colin Bond and Peter Brock and continues to the present day. From 1968 to 1980 almost every major touring car race held at the circuit was won be those driving either a Holden or a Ford.

Because of small pit area pits spots are limited to avoid not getting a pit spot make sure you REQUEST a pit stop and DO NOT enter pits until your pitchief says its ok.