Skip to content
You are here
Shanghai International 2005 for GTR2

Tommy Champion from TEAM CHINA gave me permission to convert their fine Shanghai track to GTR2.
So here we are…

The Shanghai International Circuit is a motorsport race track, situated in the Jiading District, Shanghai. The circuit is best known as the venue for the annual Formula 1 Chinese Grand Prix which has been hosted since 2004. 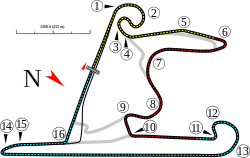 The Shanghai International Circuit is the first in China to be purpose-built for Formula One and it hosts FIA Formula One World Championship Chinese Grand Prix every year since 2004. The circuit also holds a number of global high-profile series, including the FIA World Endurance Championship and the Blancpain GT Series Asia.

Shanghai International Circuit is a no-expense-spared facility, conceived by the Shanghai authorities as a way to showcase the city to the world. A 5.3 sq km site was chosen in the Jiading District in the north west of the city, close to major car parts manufacturing facilities and a budget of 2.6 billion yuan ($450 million) raised through a government-funded joint-venture company, the Shanghai Jiushi Group.

Herman Tilke was chosen to design the track and associated buildings, and between April and May 2003, engineers visited the site to draw up their plans. The site was actually a swampland, previously used as rice paddy fields, and extensive groundworks had to be completed to construct the circuit. For 18 months some 3,000 workers were on site daily to complete the facility – a remarkable feat of both engineering and logistics.

When it opened, visitors found a vast complex, dominated by the main grandstand and pit complex, which featured wing-like viewing platforms crossing the circuit at either end. This can hold 30,000 spectators alone, and others around the circuit take the total capacity to 200,000. Paddock facilities were also unique – each of the F1 teams had its own building, arranged like pavilions in a lake to resemble the ancient Yu Garden in Shanghai.

The track was made for rFactor from the scratch by TEAM CHINA. It is considered to be the most accurate version of the Shanghai track.

– corrected the fog when it’s raining