Skip to content
You are here
Slovakia Ring for GTR2

Original Track created for rFactor by CidJc – www.f1jc.cz.
Thanks to CidJc for giving me permission with this conversion.

Automotodróm Slovakia Ring is a motor racing circuit in Orechová Potôň, Dunajská Streda District in Slovakia, approximately 30 km away from Bratislava Airport. It was built between 2008 and 2009. Sam Bird set the current track record on 5 September 2012, during a testing session. He completed a lap in 1:41.600 in his Dallara T12 of Formula Renault 3.5 Series (2012) prepared by ISR Racing. 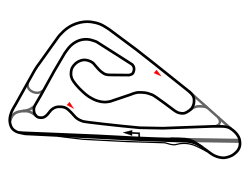 A major feature of the circuit is a prominent hump on one of the straights that causes some cars to fly with the front wheels off the ground. Only one car has flipped over entirely and crashed after going over the hump at a high speed. Prior to start of the 2014 season the hump between turns 2 and 3 was rebuilt.

In this conversion I have fixed all these bugs from the original rfactor track :

– Flickering white lines (road intersections): fixed.
– Flickering pits textures: fixed.
– Main control building windows had in the original track a non reflective texture (light blue) – I have replaced it with glass texture (reflective).
– The lake in the middle of the track had a simple blue texture for the water and I have replaced it with real water reflective texture.
– New power towers: I have done new power towers and painted then in light green as they are in the real track. If you know the rfactor track you will notice them.
– Thin power lines: they were TOO thick in the original rFactor track: fixed. If you know the rfactor track you will notice it.
– Curbs were set wrong in the original track (no shadows receiver & no feel in forcefeedback): fixed.
– Package size and the whole track optimized (double objects deleted): fixed. Original rFactor 4 layouts: zipped file size is 160 megabytes, GTR2 with same 4 layouts zipped file size is around 66 MB.
– New trees added/relocated according to the last GT3 race (august 2011).
– Grass textures: improved.
– Removing loose grass textures placed at wrong places (exit of pits, road intersections).
– Scene lighting adjusted / fog adjusted.
– Groove racing line: fixed.
– AIW files done from scratch : original files were set with only one path (there were no left/fast/main path).

This is a small update to the AI of variant 4 (GP layout).

What does this update fix ?