if someone knows the author(s), please feel free to leave a comment on eSport-Racing.de, thank you. 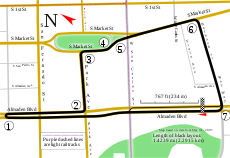 The inaugural event was held July 29–31 in 2005. As the newest addition to the world series, the San Jose race was expected to raise interest in racing in Northern California. Although the Champ Car World Series was the main event, a number of other races were also held. Additionally, a week of fairs, music, charity events and promotional activities also supported the Grand Prix.

The title event of the inaugural Grand Prix was held at 2:00 pm PST on July 31, 2005. It was race #8 of the 2005 Champ Car World Series. Other races included the Trans-Am Series, the Toyota Atlantic Championship, the United States Touring Car Championship, and the Historic Stock Car Racing Series. The weekend also featured the Formula D Drift racing competition.

On race weekend, many critics, including several drivers, criticized the track for being too narrow, too bumpy and dangerous. Some drivers even jokingly compared the track to a motocross track, and somewhat-seriously complained of headaches after several laps. Several modifications were made to the track following initial practice and qualifying sessions, including adding a chicane to the front stretch and moving a grandstand to make room for a bigger run-off area. Still, the crossing of the VTA‘s light rail tracks on the course actually caused the Champ Cars to bounce and become slightly airborne in a high-speed area of the track.