Skip to content
You are here
Surfers Paradise 2004 for GTR2

Thanks Zero-G for allowing me to convert this nice track to GTR2 !

All modifications are made based on real photos and videos from the 2004 track.

For the update of the circuit and some of the new 3D objects, one or more textures were created with images of CGTEXTURES.COM. These images can not be redistributed by default, please visit www.cgtextures.com for more infos. 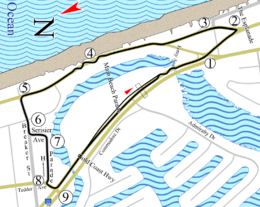 The construction of the circuit has been acclaimed internationally and is used as a benchmark for new temporary street circuits world-wide. Over a full 12-month period plans are laid and then implemented to transform a bustling residential, commercial and holiday destination into a temporary street circuit capable of facilitating high-speed motor races and hundreds of thousands of people. The circuit construction since 2009 has been project managed by local Gold Coast firm iEDM who specialise in motorsport venue engineering and delivery.

After many months! I finally found the problem that some players had invisible walls across the width of the track, which not stopped the cars. I could not find this bug, because at home I did not have this problem, but recently in the spanking Automobilista conversion i had this problem – finally I could solve it !

sorry to all for the long wait until I could solve the problem !

– cutted the entire circuit, as well as all major groups of objects in order to correctly assign the shadows
– reviewed all textures
– added many more objects
– modeled and added missing infrastructure
– editing and correction parts of the garages
– added night lightning
– added TV screens
– AIW fixes by Thierry81, specially adjusted for the ChampCar Mod (there were some problems in two turns with the AI race)
– new video files (BIK) created by Boblebric

and many more other things, but to much to list…

copy the .bik file of your choice and paste it into the Surfers_2004 main folder – allow to overwrite existing file with “YES ALL” – done.

In this new version I have to correct several problems that have been observed over the previous version in terms of baffles.

Tested with DirectX 7 and 8 without any problems.

SimBin for GTR2
Adobe for Photoshop
Dave Noonan for 3DSimED

also thanks to Surtees, Trèfle, Boblebric, Rico83s and Hughes for beta testing.