Skip to content
You are here
Targa Florio for GTR2

Note : this reworked Version of Targa Florio for GTR2 was official released by GTR233 on racedepartment.com

The Targa Florio (“Florio Plate”) was an open road endurance automobile race held in the mountains of Sicily near the island’s capital of Palermo. Founded in 1906, it was the oldest sports car racing event, part of the World Sportscar Championship between 1955 and 1973. While the first races consisted of a whole tour of the island, the track length in the race’s last decades was limited to the 72 kilometres (45 mi) of the Circuito Piccolo delle Madonie, which was lapped 11 times. 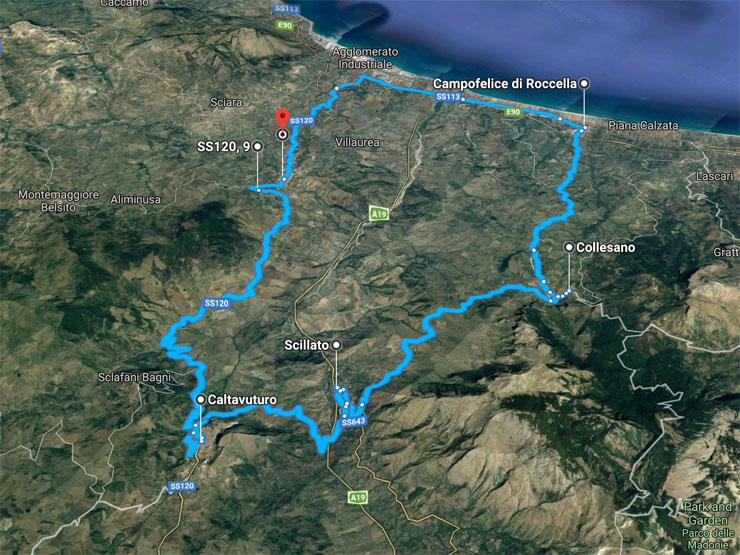 After 1973, it was a national sports car event until it was discontinued in 1977 due to safety concerns. It has since been run as a rallying event, and is part of the Italian Rally Championship.

This optimized version represents 6 months of work (updated CAM/AIW/Textures and some objects) for me and is intended to allow low end PCs to run this great track with 2Gb RAM only (original track CTD if you don’t have 4gb RAM).
Besides AI are now able to finish a full lap contrary to original version where most AI crashed and returned to pits.
I have fixed non working CAMs at the beginning of the track.
I have enabled dynamic fog contrary to original which has no fog at all (this feature looks better with Bjarne new GFX available in HQ Anniv. Patch).
I have increased rearview distance and objects number shown in mirrors.
Compatible with both NOCD/DIGITAL STEAM EXE contrary to original version which makes CTD with STEAM.

v1.2
– updated TRK/AIW/GDB
– updated textures (thanks to leon_90 for advices)

v1.3
– reduced road bumps (thanks to Shovas and Miguel for advices)

v1.6
– updated AIW to reduce AI accidents (but there are still some because road is narrow)
– updated CAM files for better external view/replay
– updated LODs with different images for each version

v1.7
– set race laps to 11
– disabled collision for some barriers to let AI pass through and to avoid big AI crashs and abandons
(there are still some small accidents but AI should continue and finish race)

v1.8
– fixed an hairpin where AI can be stuck
– reduced fog over the horizon

v2.0
– fixed CAM/replay off at the very beginning between pits and start line : now you will see your car in this area

v2.1
as too many people do not read my readme and do not install Bjarne GFX Shader Patch (set by default with HQ Anniversary Patch)
to patch the fog issue in default GTR2, I decided to remove dynamic fog for daytime and for all versions except for the dedicated
FOG version (fog effect will still look better with Bjarne GFX Shader Patch though).

In Targa folder you have 6 7zip archives, just extract them with RIGHT MOUSE CLICK then left click EXTRACT HERE and let overwrite ALL files/subfolders

– You can set track settings to MEDIUM/HIGH/FULL with NOCD EXE or DIGITAL STEAM EXE
– this track is one of the heaviest in term of material objects so RAM limit can be reached sooner than any other track which can lead to CTD (crash-to-desktop)
– first run will generate HAT file (critical time where most CTDs occur) and will take a long moment, next time game will load the track quicker
– if you have CTD at first run for HAT generating then set graphics on MEDIUM in single practice session with NO AI, set original skies (not HD/HQ)
– if you have CTD after several races then exit GTR2 and retry (memory will be purged)
– AC/rF2 cars conversions are much heavier than old GTR2 models so reduce AI number with these kind of high poly mods
– choose hood/bumper view for twice more fps than in cockpit
– set track draw distance on FAR/Very FAR in menu to show full horizon (mountains may disappear on Low/Normal)
– fog version doesn’t work with LOW track settings (black screen)
– fog distance is linked to track draw distance (fog will be more dense/closer on Normal track draw distance than on Very Far)
– fog over mountains has no transparency with original GFX so you need Bjarne new gfx170a available in my HQ Anniversary Patch
– I have disabled GTR2 rain reflection because it increases the chances of CTD and because effect doesn’t look great especially on this big track

– I have made optimizations to run it on 2GB RAM PC with very few AI opponents (original track doesn’t start with 2GB RAM) but do not try more AI with only 2GB RAM because you will get Crash-To-Desktop (CTD), so it is highly recommended to install my HQ Anniversary Patch to get 4Gb patch if you have Windows 64bits

– Instant replay works but Replay recorder will CTD with only 2Gb RAM (on Windows 32bits even if you have 4Gb RAM or more, the 4Gb patch does NOT work so GTR2 will use 2Gb RAM max and will CTD if game tries to load more than 2Gb)

This is a non-profit work made by passion for old gem GTR2 and all of the content is provided free of charge “as is”, without warranty of any kind, either expressed or implied, use it at your own risk : authors will not be held responsible for any losses incurred, either directly or indirectly by the use of files included in this mod. You are permitted to install and play this mod for personal home use only, any other uses are forbidden. It is forbidden to convert/modify/distribute any materials, or use it as part of another mod without authors written permission which cannot be ceded to a third party. The original source is only available at RACEDEPARTMENT.COM