Skip to content
You are here
Texas World Speedway for GTR2

Thank You Plickbadger for creating this track for rFactor and allowing the conversion for GTR2.

You did an excellent work, Ken !

Texas World Speedway, was built in 1969 and is one of only seven superspeedways of two miles (3.2 km) or greater in the United States used for racing, the others being Indianapolis, Daytona, Pocono, Talladega, Auto Club, and Michigan (there are several tracks of similar size used for vehicle testing). TWS is located on approximately 600 acres (2.4 km²) on State Highway 6 in College Station, Texas. There is a 2-mile (3 km) oval, and several road course configurations. 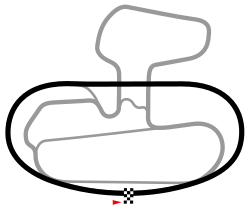 The full oval configuration is closely related to that of Michigan and is often considered the latter’s sister track, featuring steeper banking, at 22 degrees in the turns, 12 degrees at the start/finish line, and only 2 degrees along the backstretch, compared to Michigan’s respective 18, 12, and 5 degrees. The last major race occurred at the track in 1981. The track was used by amateur racing clubs such as the SCCA, NASA, Porsche Club of America, Corinthian Vintage Auto Racing, CMRA, driving schools and car clubs, as well as hosting music concerts and the like. The speedway was also a race track location for the video game, Need for Speed: Pro Street.

During the 1980s the track fell into a state of disrepair, and both NASCAR and the Indy cars chose to drop it from their respective schedules. It continued to operate in a limited role for amateur racing. In 1991 Ishin Speed Sport, Inc. purchased the facility and repaved and modestly refurbished it. It hosted races for ARCA, but after 1993 the company withdrew. The facility did serve as a venue for amateur and club racing, along with private testing. NASCAR teams have used the oval for testing (as it mimics Michigan and Fontana), as a way of skirting the tight restrictions prohibiting testing on active tracks on the schedule.

During a January 2009 test, Greg Biffle managed to reach a top speed of 218 mph (351 km/h) in a test for Roush Fenway Racing as part of evading NASCAR’s testing ban. This became the fastest speed ever achieved on this track by a stock car (amateur or professional). The average speed for the full lap was 195 mph (314 km/h).