Skip to content
You are here
TI Circuit Aida for GTR2

Thanks to Piro for allowing me to convert this nice circuit to GTR2 and GT Legends.

Okayama International Circuit until December 31, 2004, is a 3.7-kilometre (2.3 mi) private motorsport race track in Mimasaka, Okayama Prefecture, Japan. TI was the abbreviation of “Tanaka International” after the name of the golf club owner, Hajime Tanaka, though the name of the circuit was officially “TI Circuit Aida”. 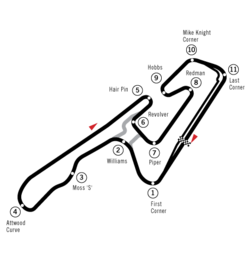 As well as hosting racing events, the circuit has rental facilities including bikes and go karts available.

The course was opened in 1990 as a private race track for the wealthy. Soon, it hosted its first race, staged by veteran British drivers.

In 1994 and 1995, the TI Circuit hosted the Formula One Pacific Grand Prix; both events were won by Michael Schumacher in his early title-winning years. This race made Japan one of only seven countries to ever host more than one Formula One event in the same year. It was discontinued primarily due to its location in a remote area of Japan.

On October 26, 2008, the circuit hosted a round of the Formula V6 Asia and FIA World Touring Car Championship. The WTCC race was the first FIA world championship race since 1995. However, it was announced on June 21, 2010 that Suzuka Circuit would host the Japan round of the 2011 WTCC season instead of the Okayama International Circuit.

I have converted this track and updated the graphics and multi-texturing completely.

Boblebric for the video and loading images and icon.
Thierrydu81 who created the most of the animated flag marshals.
Greybrad who reworked both AIW files.
Luigi who created the camera files.

Circuit tested with DirectX 7, 8 and 9

Many thanks to Vivemclaren who reworked / cutted the trees (.gmt files) to reduce the fps drops on some track sections.

I do not allow any changes on my archives or their content, this also applies to the original LOD files.
You can offer alternative LODs on your website or add them to my archive in a separate folder.

Thank you for your understanding.