Skip to content
You are here
Bahrain Sakhir for GTR2

GTR2 Conversion and revised by RacerM

ALEX SCHELY :
The massive texture update to the track; BTW, I attempted to contact him several times including on his facebook page with no luck so I hope this credit suffices, because I could not get his permission for including it in the track, but the update was so substancial and brought the track to the present appearence that I felt it was vital to include it, thanks you Mr. Schely for your work.

Micheal (Die Locke) and Frank BB :
Loading OEM LODS and trackmaps, thanks to them for that extra touch 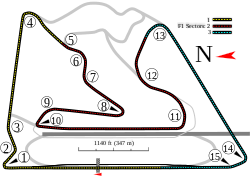 The GTR2 Version by RacerM :

First of all I want to thank CTDP modeling for giving me the permission to convert this track to GTR2. CTDP created a masterpiece when they did this track, the update truely makes their work even more astounding. Please thank them when you can for the outstanding job they did increating this track, it is truely addictive. And the texture update by Alex Schely makes the track come alive with color and life, truely artistic!

This track includes all five layout of the Bahrain International Circuit :

– I converted the track from Rfactor to GTR2
– I included the texture update by Alex and applied it to all layout.
– I added addtional adverted to the V8 Supercars layout to more accurately reflect that year of the series
– I created the alternate RIP LODS
– I changed some of the dynamic lighting effects to make the track more fps friendly and more realistic
– I added palm trees, helicopters and some other tsos that were missing

If you have any prior versions of CTDP BAHRAIN please remove them to prevent conflicts plus you won’t want them any more. just drop this file in your locations folder. If you wish, each track comes with Original style OEM LODS made by Die Locke and Frank bb to match the default tracks.

DO NOT post this track on any other forums without my expressed permission, please all you have to do is just contact me. Do not alter the contents of the file or remove the readme if you get the permission from me to post this file, post as is.

IF you really want driving pleasure :

Sakir Outer Circuit – Truck Mod, it was made for this circuit.
Sakir Inner Circuit – Any Porsche or Porsche Series Cup Mod
Sakir V8 Circuit – V8 Supercars Mod, I Could not stop driving this with those cars, I thought I was on crack!

Thank you for downloading this track and please enjoy yourselves, it was a pleasure to bring this to you.

One Thought to “Bahrain Sakhir v2.21”