Skip to content
You are here
Brands Hatch 90s for GTR2

Exactly a year later on 19 August 1990, the F3000 cars were back to contest the eight round of the Championship. Allan McNish won the 125-mile race at 108.26 mph in a Lola T90/50 with a Mugen engine, followed by Damon Hill in an identical car, with a Cosworth power plant. The final step of the podium was taken by Marco Apicella. The Sports Prototypes did not return to Kent in 1990, going to Donington Park instead. 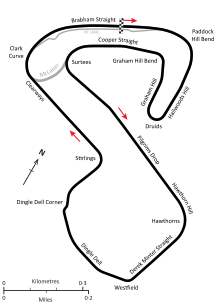 The 1991 International F3000 Championship returned on 18 August for another 125-mile race around the Grand Prix Circuit. Reynard 91Ds filled the first three places, first home being Emanuele Naspetti at 123.9 mph, driving with Cosworth-power, from Alex Zanardi in a similar car. Third went to Christian Fittipaldi in the Pacific Racing Mugen entered Reynard.

International motor racing returned for the 1996 BPR 4 Hours of Brands Hatch, when a round of the BPR Global GT Series for GT1 and GT2 sports cars was staged there on 8 September. The Porsche 911 GT1 of Hans-Joachim Stuck and Thierry Boutsen led home three McLaren F1 GTRs driven by Andy Wallace/Olivier Grouillard, Pierre-Henri Raphanel/Lindsay Owen-Jones and John Nielsen/Thomas Bscher.

In October 1999, Octagon commenced negotiations for the purchase of Brands Hatch Leisure Group: in December agreement was reached, control of Brands Hatch, Cadwell Park, Oulton Park and Snetterton passing to the new owners. Octagon obtained the right from the FIA to run the British Grand Prix from 2002 and announced the intention of rebuilding the Grand Prix Circuit, whilst at the same time negotiating with the British Racing Drivers Club to run the Grand Prix at Silverstone. Agreement was reached which ensured that the Grand Prix will be run at Silverstone for 15 years. This in turn means, that the gloriously challenging Grand Prix Circuit at Brands Hatch will not be altered greatly.

Edit of the Brands Hatch 2005 track to take it back to the 1990’s feel of the Super Touring era. This has been available as a track pack for the GTR2 Super Touring Mod for some time but now I have decided to start releasing the full pack under “90’s” series name. Full credit to lasercutter and zwiss for the original circuit.

The track is not intended to be authentic to a specific year but rather blend together all years of the decade to form a general 1990s feel. This includes changes to the colouration of the track
surfaces and textures as well for a slightly less polished, more gritty feel. For Brands Hatch the majority of source material I had dated from 1998-2000 so this time period is what the track looks most accurately in period. Also Graham Hill Bend was in a different faster configuration before 1999.