Thanks to Enders, who allowed me to convert his great rFactor version to GTR2, GTL, RACE07 & Automobilista games.

The Detroit Grand Prix (currently branded as the Chevrolet Detroit Grand Prix presented by Lear Corporation for sponsorship reasons) is an IndyCar Series race weekend held on a temporary circuit at Belle Isle in Detroit, Michigan. The race has been held from 1989 to 2001, 2007 to 2008, and since 2012. The current format of the event is a unique “doubleheader” weekend, which includes two full, points-paying races, one each on Saturday and Sunday. In addition, since 2012, the event has been scheduled for the weekend immediately following the Indianapolis 500. 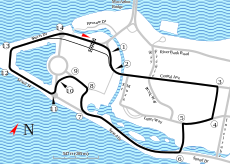 The origins of the event date back to the Formula One Detroit Grand Prix on the Detroit street circuit. The CART series began headlining the event in 1989, and in 1992, the race moved from downtown Detroit to Belle Isle, a park situated on an island in the Detroit River. The IndyCar Series took over the race beginning in 2007. The race has been supported by Indy Lights and Formula Atlantic and top-level sports car series such as the Trans-Am Series and the ALMS.

Open wheel racing in Detroit dates back to the 1920s–1950s, when AAA held the Detroit 100 at the Michigan State Fairgrounds Speedway. AAA also held one five-mile (8 km), non-championship race at Grosse Pointe in 1905.

– corrected error line of departure (XFINISH) from the Indy version. Thanks to Zerodann! for reporting the problem.