Skip to content
You are here
Detroit 1988 for GTR2

Here we go with the next masterpeace of the season 1988 Detroit by Carrera.4

He kindly gave his permission to convert all his current and upcoming tracks to the SimBin universe. Again a very BIG “Thank you so much” for this kind offer!

Due to the quality of the GTL version, it takes only some mouse-clicks to gain a GTR2 Version.

The streets of Detroit, in the U.S. state of Michigan hosted Formula One racing, and later CART racing, between the 1982 and 1991 seasons. The street circuit (course) was set up near the Renaissance Center and the Cobo Arena, also including a small part of the M-1 highway, also known as Woodward Avenue. It is a flat circuit, with elevation ranging from 176 to 184 metres above sea level. 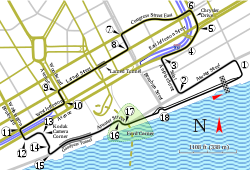 – Carrera.4 for his non stopping fantastic job in scratch building for the Racing-SIM community
– DerDumeklemmer for his GTL conversion
– Taku Loading Screens

We’re offering the result of all our working hours free of charge, but we ask for one single fee from the user…

Pls. give a little respect to all these working hours spent by everybody involved in this version:

This project is a “take it as it is, or leave it”-release. Pls. see EULA for more detailed information.

have a lot of fun,
GTI-Heizer