Skip to content
You are here
El Zonda for GTR2

Autódromo Eduardo Copello is a motorsports circuit located in El Zonda, San Juan, Argentina. It has hosted events in the TC2000 series. 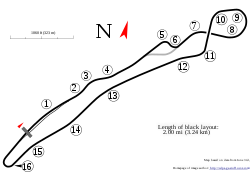 The engineers who were in charge of the projection and construction of the autodrome are Romano Petrini and Alberto Olivera and the vision to build it in the Quebrada de Zonda was the engineer Hugo Montes Romaní, who at that time was Minister of Public Works in the named province.

The racetrack was inaugurated on October 8, 1967 with a career in Road Tourism, and began to transcend national and South American level for a special and very demanding construction. Quickly, El Zonda became one of the best road courses in South America and an icon of the province of San Juan.

Turismo Carretera returned to the racetrack in 1968, after which it never returned.

In 1970 the Argentine Mechanical Formula 1 was presented. At that moment, Raul Kissling got confused and was dismissed from the car. He suffered minor injuries. One of the tires collided with the post, which collapsed and killed the child in the crowd. It was the first death that occurred in the autodrome.

In 1973, the first National Sun Festival was held in its facilities.

In 1994, a new death occurred in the San Juan road course, as the local driver Carlos “Negrillo” Sánchez died in a tragic accident in the third and final race of the first date of the Gol championship made in that circuit, after the car in which the ill-fated runner was mounted had suffered a mishap in one of his tires, causing the car to overturn and, incidentally, suffered an explosion, generating a fire, which triggered almost immediately the death of the pilot; due to the above, there were several attempts to save the life of the “Negrillo” of that fate, but the magnitude of the fire difficult to extinguish (and its consequent advance) made them unviable, which contributed to the death of the pilot, given the negligence of the precarious security produced on that occasion.

The autodrome has been used as a stage camp in several editions of the Dakar Rally.