Skip to content
You are here
Interlagos GSC 2011 for GTR2

Autódromo José Carlos Pace, also known as Interlagos, is a motorsport circuit located in the city of São Paulo, in the neighborhood of Interlagos. It is named after Brazilian Formula One driver Carlos Pace, who died in a plane crash in 1977. It has hosted the Formula One Brazilian Grand Prix since 1973. 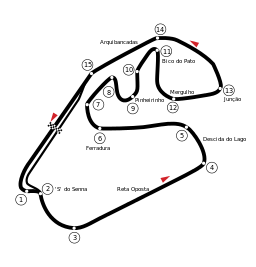 The Brazilian Grand Prix has always been more of a promoter event than a profit-raiser in itself. The contract was prolonged until 2022, although tobacco advertising has been banned since 2006.