track was found in a F1 Trackpack without Readme file or
further details – all infos without warranty on correctness.

Circuito de Jerez-Ángel Nieto (formerly known as Circuit of Jerez and Circuito Permanente de Jerez), is a 4.428 km (2.751 mi) racing circuit located close to the city of Jerez de la Frontera, 90 km (55.9 mi) south of Seville and deep within the sherry-producing south of Spain. The project was led by the Spanish engineer Manuel Medina Lara, based on a preliminary idea from Alessandro Rocci. 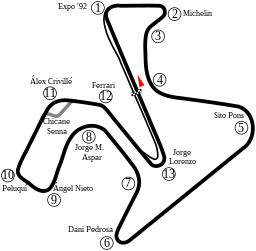 The circuit opened on 8 December 1985. During 1986 the circuit hosted the first international motorcycle event in Spain in March and the Formula One Spanish Grand Prix in April. The circuit’s relatively remote location hindered significant spectator turnout, although up to 125,000 can be accommodated. Because of this, F1 moved to Barcelona following the 1991 race.

Due to the hosting of the European Grand Prix in 1994, the circuit instituted safety and layout changes from the 1990 configuration, including a new chicane (the Senna curve) at the corner where Martin Donnelly had an appalling accident during qualifying for the 1990 Spanish Grand Prix, and the elimination of 4 corners to create the long right hander, Curva Sito Pons. Jerez also hosted the 1997 European Grand Prix, which was the championship decider between Michael Schumacher and Jacques Villeneuve, who collided during the race.