Skip to content
You are here
Nordschleife 2008 for GTR2

A conversion from GTR Evolution to GTR2, with optimizations and small bug fixes by me. 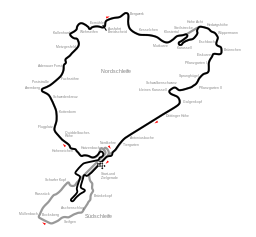 features available in GTR2 but absent from GTR Evo are not supported, i.e.:

– flickering objects when headlights are turned on
– no night lighting

the track comes as it was made for GTR Evo, i.e:

check first your GTR2\UserData\HAT\ folder and delete the following files if exist :

then extract with WinRAR or else and drop the NOS_2008 folder into your GTR2\GameData\Locations directory – done.

Version 1.0:
– added loading screen by Mr. Floppy
– changed ambient lighting colors to be more in line with GTR2 (thanks to Fiasco)
– changed all shadow casters to be dynamic
– removed numerous fictitious ad banners
– (Tourist) fixed starting lights not visible from first row of the grid
– (VLN) fixed a bug that made the grass and sand traps on the GP track look wrong
– (VLN) added Coca-Cola-Kurve shortcut lap timer start

Version 0.2:
– fixed a bug that made cones collision objects

Version 0.1:
– fixed a bug that caused a CTD when exiting the track
– removed unreferenced models and textures

– the track should happily live together with other Nordschleife conversions
– Blacklisted hosting site(s): gtr4u.de

Only for private, non-commercial use / entertainment.
Do not convert to other platforms than SimBin.
Use at your own risk.