Skip to content
You are here
Nürburgring Südschleife for GTR2

GTR2 Conversion and revised by Rickoshea

The Nürburgring Südschleife (south loop) was a German motor racing circuit which was built at the same time as the world-famous Nürburgring Nordschleife (north loop). These two layouts were joined together by the Start und Ziel (start/finish) area and could therefore be driven as one track that was over 28 kilometres (17 mi) long. 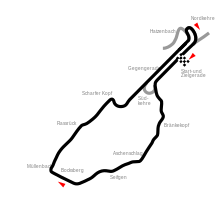 Opened in 1927, the Südschleife was rarely used after the Nordschleife was rebuilt and updated in 1970 and 1971 and was finally destroyed by the building of the current Nürburgring Grand Prix circuit in the early 1980s. Today only small sections of the original track remain.

The shared start/finish area of the Nürburgring complex consisted of two back-to-back straights joined together at the southern end by a tight loop. The entrance to the 7.5 kilometres (4.7 mi) Südschleife lay on the outside edge of this hairpin and was signposted as the road to Bonn. It immediately dropped sharply downhill and under a public road before winding through a heavily-wooded section.

Tight corners soon gave way to fast downhill sections with flowing bends until, at the outskirts of the nearby town of Müllenbach, the track turned sharply northwards and began a long climb up the hill.

At the end of this run came a hairpin turn which led to a long curve around the bottom of a hill. This led onto the back straight of the start/finish area. At this point it was possible to continue onto the Nordschleife or take two sharp right-hand turns in order to enter the starting straight once again.

Photographs of the track in use show that trees and hedges were not cut back in many areas, being allowed to grow right up to the trackside. Although the Nordschleife had very little in the way of run-off areas, the Südschleife seems to have had none at all, which was likely to have been a factor in the choice of circuit for major events.

In 1938 a small section of new track (the Stichstraße) was laid which allowed drivers nearing the end of the Südschleife to bypass the start/finish straights and take a right turn which led back to the start of the downhill twists. This shortened a lap to around 5.7 kilometres (3.5 mi).

The track’s “big brother”, the Nordschleife, was much longer and more challenging and so naturally became more famous and more favoured. Throughout its lifetime, the Südschleife was rarely used for major events. In the early days, the full twin-ring layout (the Gesamtstrecke) was used for the big races but soon the Südschleife was relegated to relatively small events and testing sessions.

First- A big thanks to Nick303 for making this track from scratch.

This is not the same as the Zwiss version, I started a new with a fresh rfactor copy from rfactor central.

I have Filled in all the holes, changed the track surface textures as i hate bobs track builder ones ! replaced most of the grass, fences & trees, the “concrete” sections now look like “concrete” & not a piece of sandpaper. Changed some of the signs, painted lots of parts with photoshop, then altered the bias levels so it does not look blury anymore. Added a line of cones just before first bridge to stop you going the wrong way…Oh and got the start lights working.

The “pitin” – “pitout” positions have been moved & i have marked where they are with a yellow\black cone. remember to keep on the concrete pit area or you’ll get a Stop & Go penalty ! I have not added pit lights as- 1. they did not have them in real life & 2. i could not be bothered ! The AIW has been fixed too- cars run smoothly onto concrete banking now, kink at start\finish removed, garagespots fixed & pitspots adjusted, also fuel issue fixed.

Have fun with it..