Skip to content
You are here
Phillip Island 2006 for GTR2

Converted to GTR2 by MR_INGALL

The Phillip Island Grand Prix Circuit is a motor racing circuit located near Ventnor, on Phillip Island, Victoria, Australia. The current circuit was first used in 1956.

The circuit was refurbished with a reduced length of 4.445 kilometres and was reopened on 4 December 1988 for the final round of the 1988 Swann Insurance International Series for motorcycles. 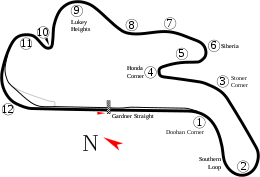 In 1989, the Australian Motorcycle Grand Prix joined the F.I.M. Road Racing World Championship calendar for the first time, and was held at Phillip Island. The 1989 race saw a race long dice in the 500 cc division between local favourites Wayne Gardner and Kevin Magee, along with Wayne Rainey and Christian Sarron. The race was won by 1987 World Champion Gardner to the delight of the huge crowd. Gardner would make it two in a row at the Island in 1990 before the race moved to Eastern Creek in Sydney for 1991. The Australian Motorcycle Grand Prix would remain at Eastern Creek until it returned permanently to Phillip Island from 1997 onwards.

Phillip Island hosted its first Superbike World Championship round in 1990, taking over from Sydney’s Oran Park Raceway as the Australian round of the series. Local riders Peter Goddard (Yamaha FZR750) and Rob Phillis (Kawasaki ZXR750) won the two races for what was Round 12 of the season, with Goddard having secured pole position. The World Superbike round continues to be held annually at Phillip Island to this day.

In 1990, the Australian Touring Car Championship (ATCC) returned to the circuit for the first time since 1977, this time as a sprint round. Dick Johnson won the round in his Ford Sierra RS500, in what was to be his final ever round victory. The event was not held in 1991 or 1992, but was reinstated to the calendar in 1993, with the sprint format then continuing every year until 2004. By then, the ATCC was known as V8 Supercars. After not appearing on the calendar in 2004, from 2005 to 2007, Phillip Island hosted the Grand Finale; the final round of the V8 Supercars season. In each year, the event decided that year’s champion, including in controversial circumstances in 2006. From 2008 to 2011, Phillip Island returned to hosting a 500 km race, this time known for sponsorship reasons as the L&H 500. The Phillip Island 500 replaced Sandown‘s Sandown 500 as the annual V8 Supercar 500 km race, an event which was later reinstated for 2012. Since then, Phillip Island has returned to hosting a sprint round of the championship, which has become known as the Phillip Island Super Sprint.

The Australian Motorcycle Grand Prix has always been more of a promoter event than a profit-raiser in itself. The contract was prolonged until 2026, although tobacco advertising has been banned since 2007.

Because of small pit area pits spots are limited to avoid not getting a pit spot make sure you REQUEST a pit stop and DO NOT enter pits until your pitchief says its ok.