Circuito da Boavista was a street circuit in Oporto (Porto), Portugal used twice for the Formula One Portuguese Grand Prix. 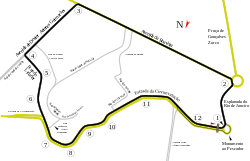 The course began at the harbor-front “Esplanada do Rio de Janeiro”, continued on “Avenida da Boavista” (hence the circuit’s name), and then twisted its way through small neighborhoods back to the start-finish line. The first grand prix was held in 1958. The course of Boavista took drivers at high speeds across tramlines, past small houses, over cobblestoned streets and difficult to overtake.

The 1958 event is remembered for an act of good sportsmanship by Stirling Moss. Moss came to the defense of fellow countryman (and title rival) Mike Hawthorn, who had run afoul of the stewards (and oncoming traffic) during an off-track excursion during the race. Moss persuaded the stewards not to disqualify Hawthorn, preserving second place, and 6 points, for Hawthorn, who would eventually win the drivers championship by 1 point over Moss.

The 1960 running was a race of attrition, with only four cars finishing within 5 laps of winner Jack Brabham. Accidents and mechanical problems ended the day early for future champions John Surtees, Phil Hill, Graham Hill and others.

If you wish to convert this circuit to GT Legends, permission is given.