Prince George Circuit is a race circuit in East London in Eastern Cape Province, South Africa. On this course the South African Grand Prix was hosted in 1934, and 1936 to 1939 when racing was halted due to World War II, and then in 1960–66. 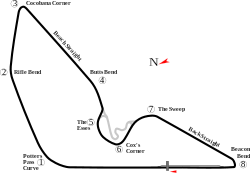 The original circuit was 23.4 km long and was run on streets through different populated areas. The start and finish straight ran along the sea shore. After three fast corners the course followed a road – which is now called Molteno Drive – that would later also be part of the shorter new circuit. Moving further east the course entered the West Bank Village on Strand Street before turning north onto Bank Street and then west on Military Road. There the track moved through the areas Fort Glamorgan and Gately. Military Road changed into Settlers Way at the height of Woodbrook and Greenfields. After driving past the East London Airport, the course turned south at the far west point onto Prince George Street and led with a relatively long series of twisty turns and one hairpin at the end back to the main straight.

The circuit was shortened to 17.7 km in 1936. Instead of taking Molteno Drive east, the course followed Potters Pass north to get back onto the original circuit at the begin of Settlers Way.

Modified to meet Formula One regulations in 1959, the track was built into a seaside amphitheatre with a length of 3.9 km. It hosted three rounds of the F1 South African Grand Prix in the 1960s. It was later deemed too small for Formula One cars, and the race was moved to Kyalami.

Used Tools and thanks to :