The Autódromo Internacional Miguel E. Abed is a racing track located in the town of Amozoc, 30 kilometres (18.64 mi) east of the city of Puebla in the Mexican state of the same name.The track has a capacity for 42,500 People. 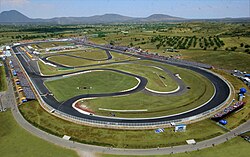 The FIA WTCC Race of Mexico was a round of the World Touring Car Championship, held at the Autódromo Miguel E. Abed near the city of Puebla in Mexico.

The race was first run in the 2005 season, the first season of the revived series. This year, the race was almost cancelled because circuit was not ready to hold a competition. It was run every year between 2005 and 2009 except in the 2007 season, when the planned event was cancelled due to problems with the Puebla circuit, although these problems were addressed for 2008. The event was run in June in 2005, in July in 2006, in April in 2008 and in March in 2009. The 2010 running was cancelled due to security and budget fears in the region.

The annual 24 Hours of Mexico race is held at the track since 2006.

The circuit facilities are the most important of the country. It opens to every kind of events including: Test Driving, Driving Experiences, Track Days, 0 to 60 series, Helicopter Experience, Corporate Events, Driving School and Go-Kart circuit.