Skip to content
You are here
Roy Hesketh 2010 for GTR2

The Roy Hesketh Circuit was a racing circuit located on the outskirts of Pietermaritzburg in KwaZulu-Natal. It was named after South African racing driver Roy Hesketh, who died in the Second World War. Doug Aldridge, Colin Dove, Ossie Fisher, George Finch and George Shrives got together as a Consortium from Pietermaritzburg in the early nineteen fifties to first build and then maintain and improve the circuit. 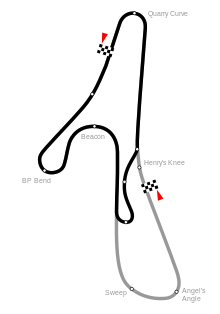 In 1973 the South African government banned all motorsport due to the world oil crisis, the circuit went into decline and finally closed in 1981 after only 28 years.

– Era specific 3D Dunlop bridge
– Genuine pit sections, as they were back then
– Access tunnel to infield.
– Load screens for Power & Glory, GT Legends and GTR 2. To use (for eg. Power & Glory), remove the original RoyH_LOD.jpeg and just remove ‘PG’ at the end of the other file name.
– On the inside of Quarry, I have placed a memorial plaque for my father, who’s ashes were sprinkled there – He absolutely loved Roy Hesketh, and you can see why after a few laps there.

– In the revue mirror, objects appear to be floating with parts of the terrain not rendering.
– Car falls through the ground on Time Trials.
– Menu track map does not show – not sure how to correct that

As this is Beta, there are bound to be a few hassles – I’d like feedback on fixing anything.

Pile up those laps, this is a great place to get stuck in. I did over 800 laps during testing and I’m still not bored with it 🙂

I have made a fix for the Track v0.9 from Paul Minnaar

• Converting .jpg and .png grafic to .DDS
• 33 Dynamic Shadows -> Static, only 1 is Dynamic, the most ShadowReceiver=True delete
• TA64.gmt – TA105.gmt delete (not visible), TA17.gmt + TA18.gmt small correcting
• Visgroups deactivate and many LodOut higher, so nothing is poping in/out and close any gap
• Underground material, so car not fall in nothing, when reset the car.
• Near PitIn a red Mustang (8.8 MB sitze), and in Pit tool trolley with 9.3 MB sitze. In .trk you found on end of file. When you have fps problem, deactivated this.
• AIW: PaceCar, Timetrial, small corrections groove an AI speed values

– On any position you see shadwos in tarmac, without object.