Skip to content
You are here
Salzburgring 2009 for GTR2

Original Track created by Com8 and Steppenwolf for rFactor

The Salzburgring is a 4.225 kilometres (2.63 mi) motorsport race track located in Koppl, east of Salzburg. 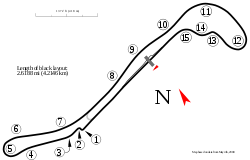 The race track was first opened in 1969. Lying in a narrow, alpine valley, it has a rather simple layout, with two long straights plus the sweeping and fast “Fahrerlagerkurve” (“paddock turn”) at the bottom, and the narrow “Nockstein-Kehre” on the top. In spite of its simple layout, it garnered a fearsome reputation for the high speeds reached on the straights and the “Fahrerlagerkurve”. Michael Doohan describes the section between 7 and 10 as his all time favorite piece of racetrack, likening it to “threading a motorcycle through the eye of a needle at 180mph whilst banging fairings with your competitors with armco barriers on each side”. He continues “Sure it was fast and dangerous, but also enormous fun. To me it’s what motorcycle racing is all about”.

The Salzburgring track hosts touring car races like the German ADAC Procar Series, Deutsche Produktionswagen Meisterschaft, Deutsche Tourenwagen Challenge, Super Tourenwagen Cup and the European Touring Car Championship. It was also the home of the Austrian motorcycle Grand Prix from 1971 to 1994, except for the 1980 and 1992 seasons. Giacomo Agostini and Angel Nieto are the all-time leaders in motorcycle Grand Prix victories at the circuit, with six wins apiece. Sidecar motorcycle races were also held at the venue. The track has also hosted the Oldtimer Grand Prix as well as during the last years a “Rupert Hollaus Memorial” organized by Ex-Grand Prix motorcycle and sidecar racer, Wolfgang Stropek. In 2008, the circuit played host to the then one-off European Touring Car Cup, with the event being won by Michel Nykjaer.