Skip to content
You are here
Schottenring 1967 for GTR2

Special thanks to Mark Daniels who allowed me to convert his circuit to
LPG Schotten, rFactor, GTR2, GTL and Race07 platforms.

The Schottenring was a motorsport race track situated near Schotten in the Vogelsbergkreis of Hessen, between Fulda and Gießen. After Nürburgring, Schleizer Dreieck, Solituderennen and AVUS, it was one of Germany‘s oldest race tracks, inaugurated on 22 July 1925. 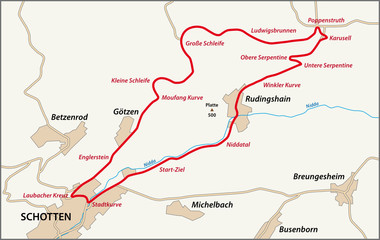 The track was popular for club events, and had attracted 90,000 spectators to its first post war event in 1947. In 1953, partially as the result of a compromise between Germany’s two controlling bodies, the DMV and the ADAC, it was selected to host the German motorcycle Grand Prix. Even by the standards of the day, the track had never been regarded as particularly safe, and after an inspection made before practice had begun, the factory teams from AJS, Norton, Gilera and Moto Guzzi decided unanimously that the track was too narrow for “modern” 350s and 500s to race. Bordered on many fast corners by trees and with a track surface so slippery at the most dangerous points that it would be disastrous to run a championship event there. With the unprecedented departure of the majority of major teams even before racing was due to begin, officials from the FIM decided that the only way to proceed at such short notice was to allow the event to continue, but that only the smaller 125cc and 250cc races would count towards the World Championship.

Racing was discontinued after 1956, but rallies and classic bikes events are still held on a shortened version.

There are two versions of the circuit included :

CY-33 for the VW T2 3D model and textures.
Luigi for the great work on the new cameras for the long circuit.
Boblebric for its small petrol pump 3D model.
TheSky for the updated AIW files to 52 cars.

For the update of the circuit and part of the new 3D objects, one or more textures were created with images of CGTEXTURES.COM. These images may not be redistributed by default, please visit www.cgtextures.com for more informations.