Skip to content
You are here
Shanghai Pudong Street for GTR2

Shanghai Street Circuit is a street circuit in Pudong, Shanghai. On 18 July 2004, the 2.85 km (1.77 mi) track hosted a non-championship race of Deutsche Tourenwagen Masters won by Gary Paffett for Mercedes-AMG.

On 28 January 2010, DTM bosses revealed the final calendar for the 2010 Deutsche Tourenwagen Masters season featured a season finale on the street circuit on 31 October 2010 for the first time in six years. 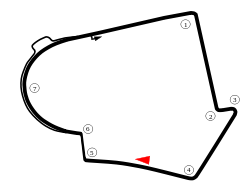 The first race of the DTM was started on 18 July 2004, but did not count to the championship. The track was then 2.85 km long. In the first race, Bernd Mayländer’s car tore a manhole cover from the cradle while driving over it, and Mayländer’s Mercedes-Benz, halted abruptly by the impact on the manhole cover, stopped in the middle of the track. The race was stopped, and all 72 manhole covers welded. Due to the time delay, only the first race could be restarted, the second race was canceled. Gary Paffett on Mercedes-Benz won the race.

In 2010, the DTM started again in Pudong, this time with a 2.465 km long, new route. Originally a 2011 DTM race was scheduled for Shanghai on the Shanghai Pudong Street Circuit for the 6th of November as a season finale. However, the race was canceled before the start of the season. It was not approved by the Chinese Motorsport Authorities, as the World Touring Car Championship is already hosting an event this weekend at the Guangdong International China Circuit.

This is the Shanghai Pudong Street Circuit.
The DTM drove on this track last year, and Paul Di Resta became the Champion.

Thanks to DW12345 for some modeling.
Thanks to icecold for beta-testing.